We argue that these participatory events not only shape policy outcomes but may also influence how the rank and file evaluates party leaders. Referendums elicit a stream of communication during which party members become increasingly aware of the issue itself and more knowledgeable about potentially heterogeneous stances of intra-party elites on that issue. Thereby, policy referendums may help members to judge party elites in terms of political issues – and may fuel policy-based leadership selection. Intra-party referendums may thus exert secondary effects on party members that go well beyond their policy outcome. The results shown before support that hypothesis.

One prerequisite for issue-based leader appraisal is that party members are aware of elite positioning. Party member surveys usually do not assess the amount of knowledge the rank-and-file has about intra-party politics.

We queried perceptions of elite positioning (W2) by asking respondents about their guesses on the presumed vote choices of the four party politicians. In addition, we coded for each politician whether his or her position was accurately perceived by a respondent. A perception was coded as accurate if the pro politicians were located in the upper half and the anti politician in the lower half of the scale. The position of neutral politician was coded as accurately perceived if the respondent reported that he had not taken position or “tends to agree” (his actual voting behavior as he revealed later).

To examine how knowledge of intra-party processes is distributed among the rank-and-file, the figure below reports raw distributions of how respondents perceived the positions of the neutral, pro and anti politicians on the legalization of same-sex marriage. The discrepancies between the subgraphs are the plot’s first key message. It means that party members differentiate between elite politicians. Are these differentiated elite perceptions grounded in reality and well informed? Party members attest more often than for the other politicians that the neutral politician did not take a clear stance on same-sex marriage (darker bar). The modal value of those who offered a guess on neutral politician’s stance correctly guessed the voting behavior (“tend to agree”) which he had publicly revealed after the referendum. Further, Figure A1 reveals stark differences in how anti politician and pro politicians were perceived. The vast majority of respondents accurately classified the state politicians as opponents or supporters of the proposed law. So, respondents knew about the stances of party elites and this knowledge was not confined to a small minority but widely dispersed among the rank-and-file. Since pre-treatment measures of elite perceptions are unavailable we assess the portion of knowledge that was acquired in the wake of the referendum campaign. Yet, we can conclude that in contrast to common depictions of party members as inattentive, after the referendum the majority of surveyed party members were aware of the diverging policy stances of intra-party elites.

However, in interpreting these results we need to take the biased sample into account. Considering that the sample likely over-represents party members who are more involved in party affairs, the reported results presumably over-estimate the actual knowledge of intra-party politics in the membership as a whole. 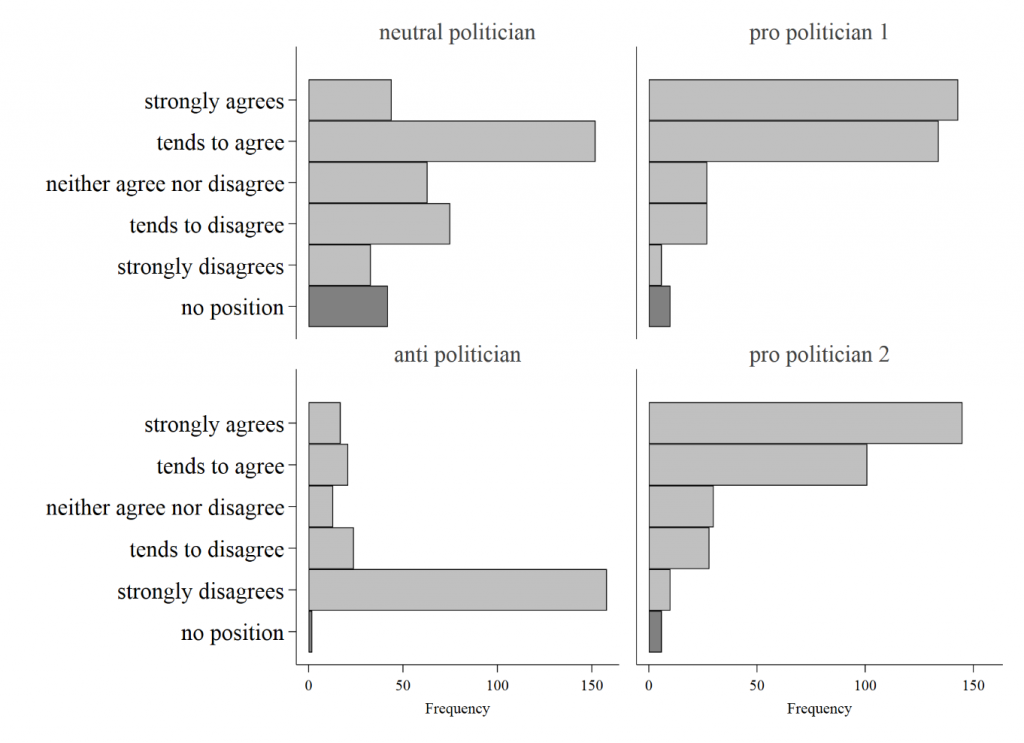